Just when we were ready to take Sparky off the special feed he had been eating to bring his weight up a bit (which worked well), it happened.

Sam had gone out with Nicole to take care of all the animals. They fed Sparky and Scooter their special grain, filled up the hay feeders in both paddocks, and fed the cats in the hay shed. After releasing Sparky and Scooter from their stalls when they had finished their grain, Nicole and Sam lingered for a bit, playing with the dogs and enjoying the beautiful spring evening with a nearly full moon rising.

This video shows Sparky exhibiting some of those symptoms:

Nicole put a halter on him immediately and called the vet while Sam came to get me and Rodney. We rushed out and consulted, pulling out our iPhones to search for info online. Some of the resources we found included:

Our quick searches provided a measure of relief as we learned that choking in a horse isn’t exactly the same as it is for a human; they are generally still able to breath. The biggest risk is not asphyxiation but aspiration. Still, it was clear that calling the vet had been the right decision.

It took a little while to reach the vet on call, who was on his way to another emergency, but he advised us to remove all food and water and keep Sparky still and calm. Fortunately, Sparky did remain quite admirably calm throughout his ordeal as the four of us, his three pasture pals, and a few cats waited with him. In addition, I followed some advice we read to massage his throat gently but firmly from front to back. I’m not sure whether this helped at all but it made me feel a bit better.

Sparky continued trying to clear the blockage with frequent attempts to swallow, which made a distinctive gulping sound, and what you see in that video is what we observed for nearly two hours. Also, periodically a great deal of green mucus emerged from his nose either in a substantial drip, a gush, a shake of the head, or a sneeze. (Sam got the worst of these and went in to change his shirt.)

We’re not sure why this happened to Sparky: he doesn’t generally eat his grain quickly, he has constant access to water, grass and/or hay, and at 16, he is not old. But we’ve had him less than a month and we do not know if he could possibly have scarring from previous injuries or even a tumor in his throat. At least we did  not observe or feel any bulges or lumps along his throat. We will have his teeth examined later this week; dental problems can prevent horses from properly chewing their food.

The vet never came out that night after all because before he could head our way, Sparky gave a great cough that apparently dislodged the clog. He then swallowed normally a couple of times and the discharge from his nose discontinued. He quickly lost interest in standing still and began wanting to eat and move around the paddock. During a phone consultation, the vet then directed Nicole to inject a syringe of banamine (which we had on hand), keep him off food but give him plenty of water for 24 hours. The next day we started him on antibiotics to prevent infection from aspiration of the discharge. 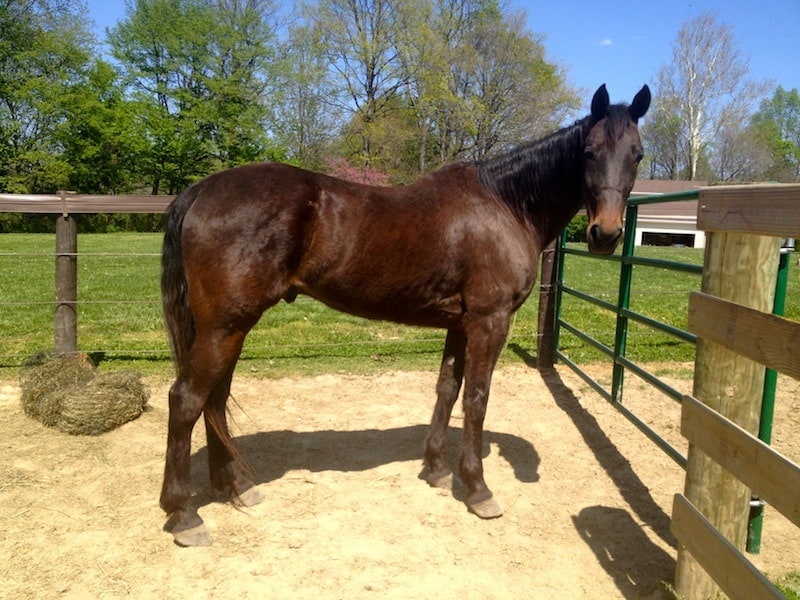