When a new horse comes to your ranch, they change things up a bit. You can’t just throw the new horse into the herd that already lives on your ranch, or bad things might happen. Horses in the wild don’t just show up and jump in with a new herd, they approach and retreat until/if the herd decides to welcome them. This works well in the wild because the horse trying to join the herd has plenty of room to retreat if the herd does not accept him. This is not the case for horses in captivity because they are kept in smaller fenced in areas which keep them from retreating easily when not welcomed into a herd. So the new horse can be easily trapped, bitten, and kicked with no way of escaping.

Therefore, it is best if you ease them into the herd a bit at a time so there is not as much fighting. When Scooter first came to live with us on the ranch, we put him in a pasture by himself where he could see the rest of our horses but not actually be in with them. We kept him separate for about a week so the horses could get used to each other being on the property. It’s surprising how much they learn about one another just by observing each other! 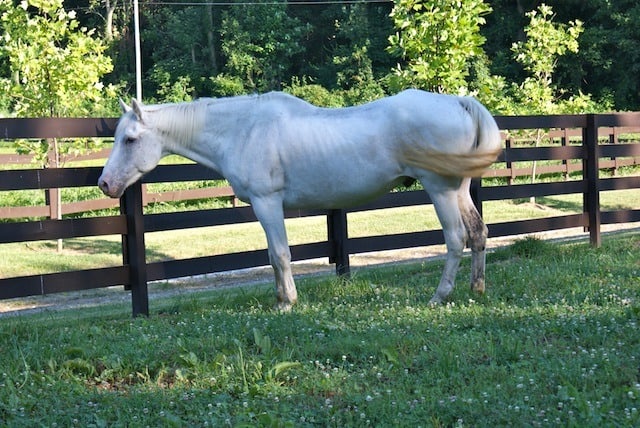 After about a week, we put Scooter in a pasture that shares the fence with the smaller paddock that the rest of the herd is in during the day. This way they could check each other out, but with a fence between them to keep the new horse from getting kicked or bitten as easily.

This went very well, and Scooter was clearly eager to join the herd. The girls all fell in love with him immediately! There was a bit of squealing and kicking through the fence, but nothing too severe. After a day or two of this, the girls were actually hanging their heads over the fence trying to snuggle up to Scooter.

Storm wasn’t too thrilled that there was a new fella in town trying to take over, but he’s a pretty easy going horse so he accepted the change pretty quickly.

Finally the day came when we felt comfortable to put Scooter in with the herd. We let Keva, Eva, Sadie, and Storm out of their paddock for the evening into the pasture with Scooter. Watch and see how it went! 🙂

First off, it’s probably pretty hard for you guys to tell which one is Storm and which one is Scooter, since they’re both big white horses! Scooter is the one chasing Storm around. Scooter decided that all of the girls were his and that Storm couldn’t have any of them. However, Keva and Storm have been together for a long time, so Keva wasn’t okay with that decision. She’s the one who kicks at Scooter and keeps trying to stay next to Storm. Finally Keva won and she and Storm formed their own little herd while Scooter kept Sadie and Eva.

Now, weeks later, they are one big herd instead of two separate ones. Scooter still chases Storm away when it’s feeding time, but they’re all pretty good buds. It’s great to have one big happy herd at last! 🙂 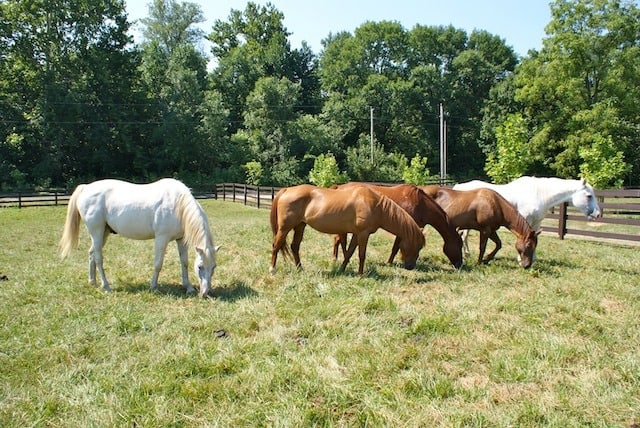