As promised in our last blog post, today we’re celebrating St. Patrick’s Day with a post about him and why we’ve chosen him as our “patron Saint.” 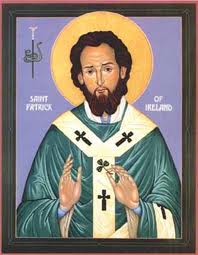 Firstly, a word of explanation about this concept of patron Saints. The traditional practice of choosing a patron Saint, as observed by the early Christian Church and continued to this day in some Christian confessions (including the Orthodox, Roman Catholic, and to some degree, Anglican/Episcopalian Churches) is done primarily as a way to connect to the rich legacy of men and women of the past who were great examples of the Christian life. A patron Saint’s life story and writings can serve as an inspiration and encouragement in ministry.

But why did the board of Achaius Ranch choose St. Patrick? For several reasons. Primarily because of his love of life and creation, his compassionate heart, especially to those most in need, and his own personal conversion story, which reflects the redemptive power of Jesus Christ. (Please read more about his life, and read his famous prayer, below).

St. Patrick is a fitting choice for two additional reasons. We the founders of the ranch, being McCullohs and Wilsons, are rather fond of things Celtic. Indeed, Achaius is a Celtic word that means “friend of horses.” The final reason is that the ranch was approved for 501(c)(3) status on St. Patrick’s Day, 2011. Really, there’s just no other choice!

The Life of St. Patrick

Patrick was born around 390 A.D. at Kilpatrick in Scotland. His parents were Christians. His father was a deacon in the Church, and the son of a priest. From Patrick’s writings, we know that, as a teenager, he abandoned the faith of his parents, choosing to live for worldly pleasures. At the age of 16, Patrick was captured by pirates and taken to Ireland, where he was sold as a slave. Patrick was given the job of tending and herding sheep. During this time of slavery, Patrick experienced the presence of Jesus Christ. Repenting of his sins, he was determined to live his life in service to His Lord. At age 22, Patrick miraculously escaped Ireland and was able to sail back to Scotland. Patrick was never the same, though. His heart remained with the people of Ireland who had never heard about Jesus Christ. He was granted a vision by God. In the vision he saw and heard the voices of the men, women, and children of Ireland calling out to him to return. Patrick returned to Ireland shortly thereafter, and began tirelessly serving the people and preaching the gospel of Christ. Among Patrick’s great gifts was his ability to use symbols and images found in the natural world to speak to the pagan people about Jesus. Most famously was the shamrock, which tradition tells us Patrick used to help explain the Holy Trinity. Patrick spent his entire adult life doing the work of an evangelist and apostle to Ireland. He faced much opposition, and many great temptations to remember the sins of his youth and doubt his worth and calling in Christ. But Patrick persevered, always returning to his identity in Christ’s forgiveness and promise of new life. Patrick died in Ireland on March 17, 461. His memory is celebrated all over the world on March 17th 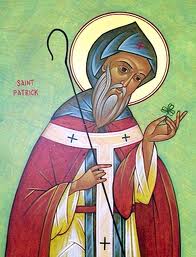 I arise today through a mighty strength, the invocation of the Trinity, through belief in the Threeness, through confession of the Oneness of the Creator of creation.

I arise today through the strength of the love of Cherubim, in obedience of Angels, in the service of the Archangels, in hope of resurrection to meet with reward, in prayers of Patriarchs, in predictions of Prophets, in preachings of Apostles, in faiths of Confessors, in innocence of Holy Virgins, in deeds of righteous men.

I arise today through the strength of Heaven: light of Sun, brilliance of Moon, splendour of Fire, speed of Lightning,  swiftness of Wind, depth of Sea, stability of Earth, firmness of Rock.

I summon today all these powers between me (and these evils): against every cruel and merciless power that may oppose my body and my soul, against incantations of false prophets, against black laws of heathenry, against false laws of heretics, against craft of idolatry, against spells of witches and smiths and wizards, against every knowledge that endangers man’s body and soul.