In the wintertime, feeding our horses becomes a whole different experience. There is little to no grass available in the pastures, so we must provide them with hay. A horse is supposed to eat around 2% of its body weight in forage, so in the wintertime, this means each horse needs around 25lbs. of hay per day. An average square bale of hay weighs 50lbs., so feeding our 5 horses requires about 2 – 2 1/2 bales of hay per day. However, in the winter when it’s cold, each horse requires more forage to keep warm, so typically whenever it drops down below 20 degrees, we up that amount to about 4 bales of hay per day. We feed twice a day, so that means 1-2 bales in the morning, and 1-2 bales in the evening.

The problem we were experiencing, was that if you just throw a bale or two of hay out to 5 hungry horses, it will be gone within 2-3 hours. Which leaves them standing there in the cold for up to 12 hours with no food in their bellies. This just didn’t seem right to us, so we decided to do a bit of research, and here’s what we found out.

Without hay to chew on and digest, they can’t keep themselves warm in cold temperatures very easily. Not only that, but horses were designed to eat almost continuously. They were not designed to go more than 4 hours without food in their bellies. Going hungry longer than that can cause gastrointestinal issues. No wonder our horses were always standing at the gate whinnying for us to feed them! They were starving! This caused them to be more aggressive towards each other during feeding time and much more stressed.

After much research, we found some great websites explaining this “new” way of feeding horses hay, known as slow feeding. Throwing hay out to horses loose allows them to take huge mouthfuls and basically gulp it down as fast as possible, as Sadie can demonstrate for you: 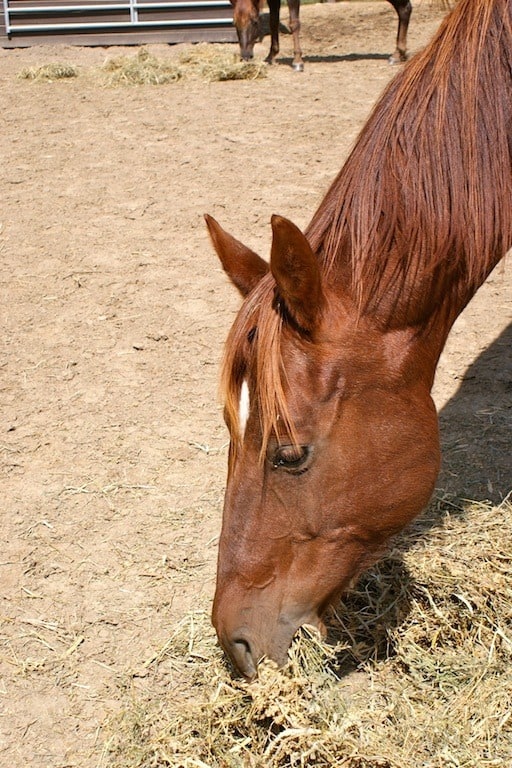 It has been discovered that using a “slow feeder” hay net, will cause your horses to have to take smaller bites, and more of them, which doubles and possibly even triples the amount of time it takes a horse to eat the same amount of hay. The netting has holes in it that have an opening of about 1 1/2″. This makes each bite more like grazing out in the pasture. The grass isn’t just laying out there loose, free for the horses to gulp up. The grass is held to the ground by its roots, causing the horses to take small bites over and over again.

After researching where we could find the best netting, we tried ordering some pre-made hay bags from a lady in Australia. Unfortunately, soon after it arrived, we saw that it just wasn’t strong enough to hold up to the horses’ teeth. They quickly tore the netting and made the holes too big. So after more research, we finally settled on some hockey goal netting from Arizona Hockey Supply. They sell bulk netting, so we had to decide how we were going to use this netting. We decided the best idea would be to use it as a complement to our hay baskets we already had. Our hay baskets are 5′ in diameter, round, and about 3-4 ft. tall. They can hold a full bale of hay easily, they keep the hay off the ground which keeps it dry and clean, and they allow the horses to still eat with their heads down in a natural eating position, which keeps dust and hay particles from falling into their noses and eyes and causing problems. Here’s a picture of the hay basket keeping the hay off of the muddy ground: 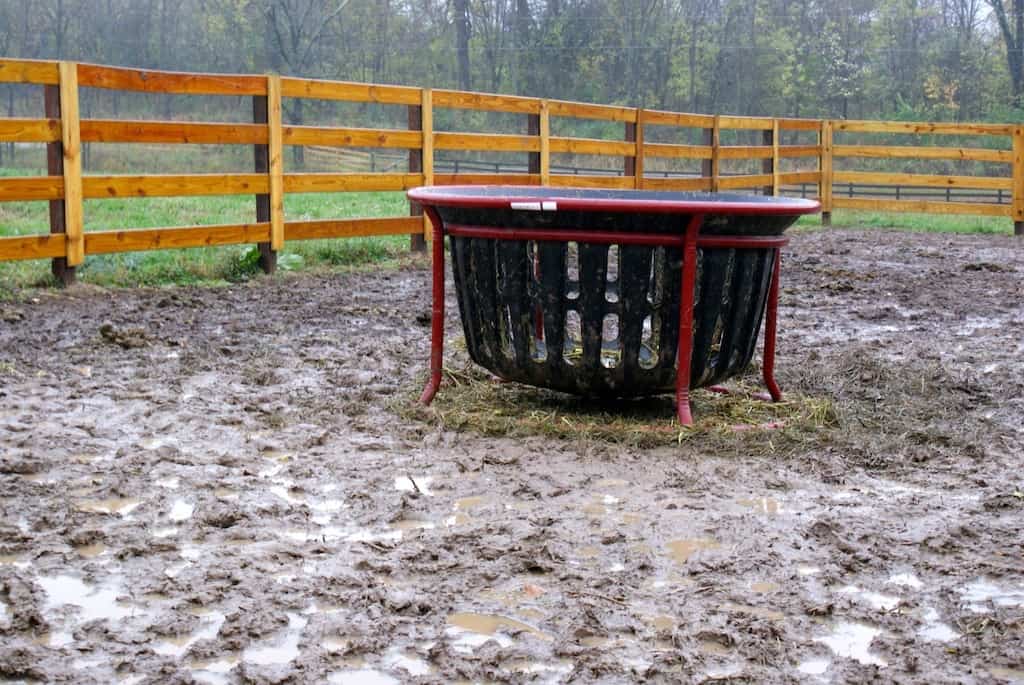 So we decided we’d cut and shape the netting to sit over the hay in the hay basket. Not only will this keep them from eating through the hay too quickly, but it will also keep the hay in the basket, which was a challenge in the past because the horses enjoyed knocking it out of the basket so they could get to the small pieces at the bottom.

But instead of just tying the netting around the hay basket and bunjee chording it in, we came up with the idea of creating a circular hoop, very much like a hula hoop, that we could tie the netting onto, which would then allow us to clip the hoop itself to the hay basket, making it much easier to put the hay in. Here’s a picture of our first attempt: 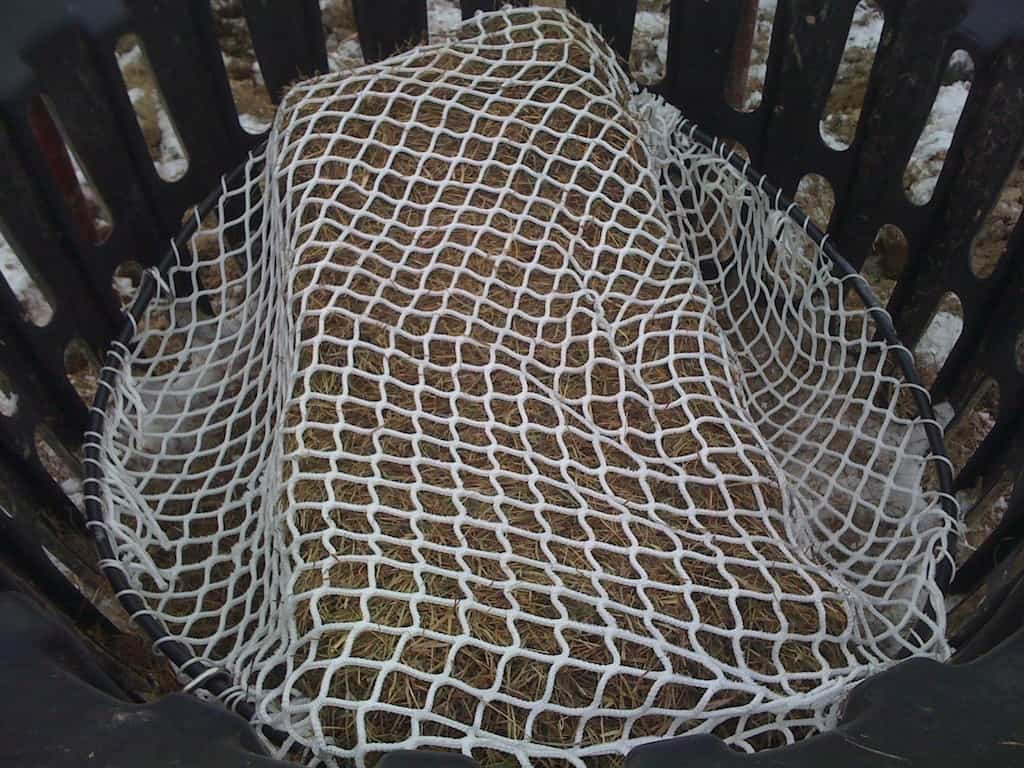 This hoop worked well for about 2 days, but then we quickly realized it just wasn’t sturdy enough to hold up against the horses. It bent from the weight of the netting, and the horses figured out that they could bend it up with their noses, and get to the hay underneath without having to eat through the net. So we went back to Lowe’s and found a thicker, stronger piece of tubing to build our hoop out of. We took the netting off the old hoop and put it on the new one we made, and it is working great. It hold’s its circular shape without a problem! 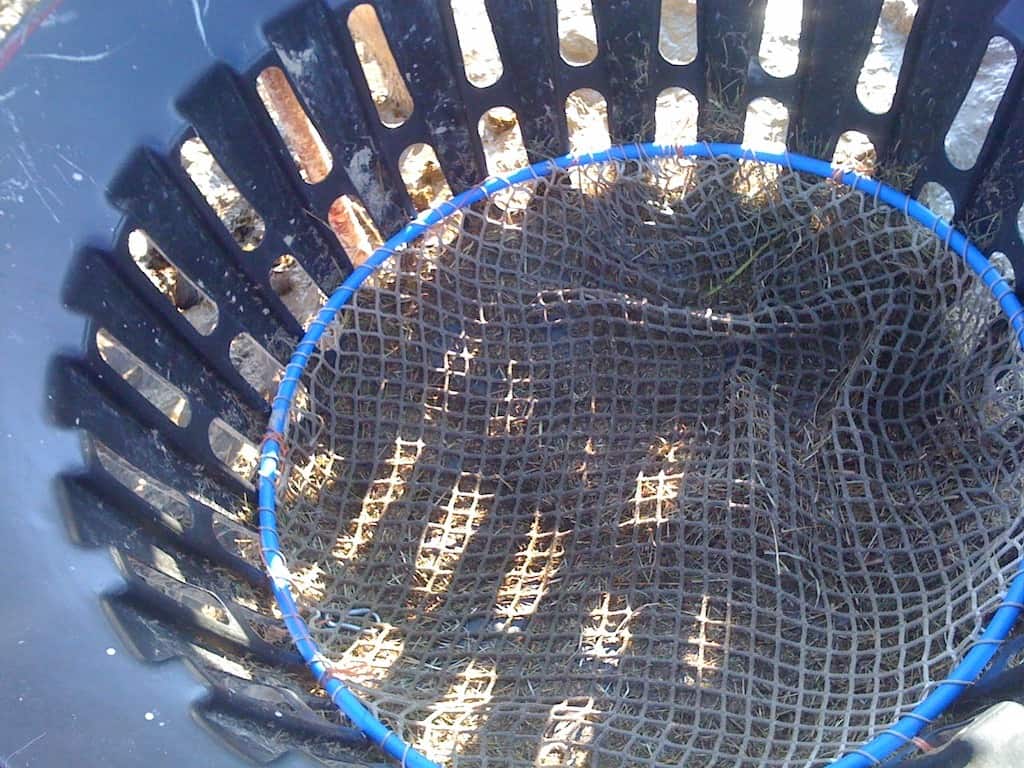 The goal with this type of “slow feeding” is to make sure the horses’ hay supply never runs out, which teaches them they don’t need to eat as much as they can immediately. They learn that there’s always hay in the basket, so there’s no need to try to gulp it down. It took our horses a few days to figure out and get comfortable eating through the netting, but now they love it. Especially Scooter, our 30 year old horse. His teeth aren’t the best due to his age, and before, when the hay was loose, he couldn’t eat it. He’d try to take a bite, but he’d get so much in his mouth that he’d have to spit it all back out. Now, it’s impossible for him to get a huge mouthful, so he can graze away as though he’s taking little bites of grass. It’s made such a difference!!

Now our horses are never without hay, and we haven’t had to increase how much we give them to make it that way. They no longer stand for hours on end through the cold waiting for hay. It’s so obvious how much happier they are. There’s no aggressive fighting between them during feeding time, and they don’t rush to eat as much as possible when we add more hay. It’s so nice to go out and see happy, full horses! 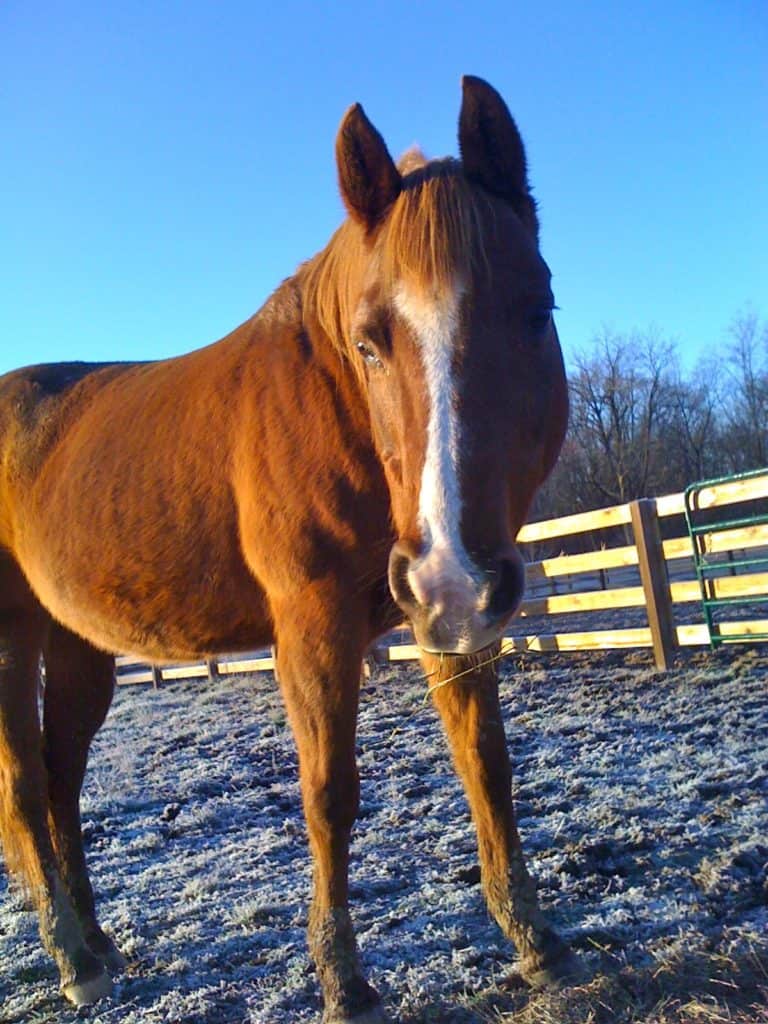