We’ve been getting a lot of questions about our hay feeders, so we decided to put all the information together in one place for you to read.

These are what we have been using for the last 3.5 years. They are homemade slow feeder hay nets and we love them! We first read about them and got the idea here.  You can find the information on actually making the nets from that link. We order the netting from Arizona Sports Equipment. (Note: They no longer sell the netting with the width size referred to in the article linked to, so we now make our nets shorter and wider.) Most of the hay nets we found pre-made online were thinner material and ripped apart very quickly. The hockey netting is very thick and strong, so it takes much longer for the horses to tear through. 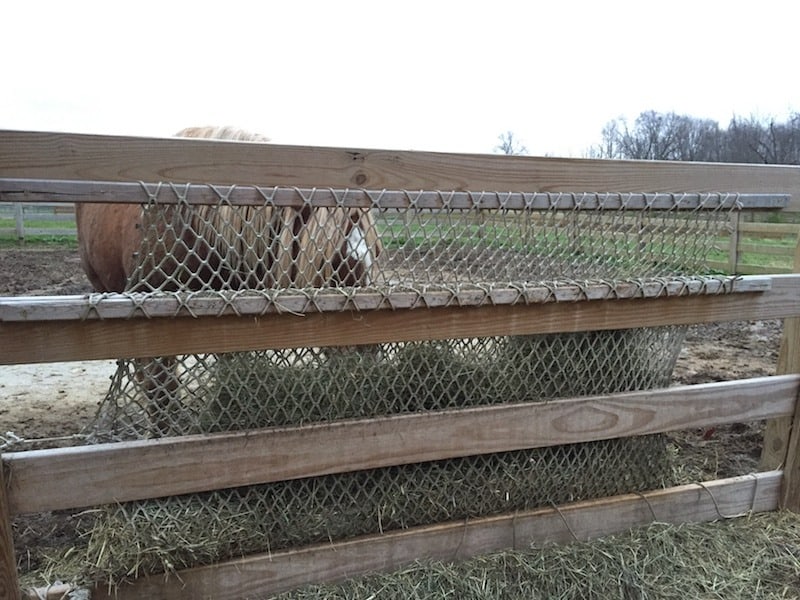 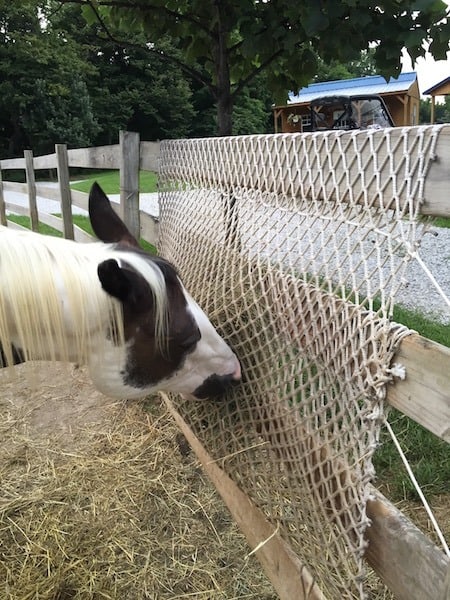 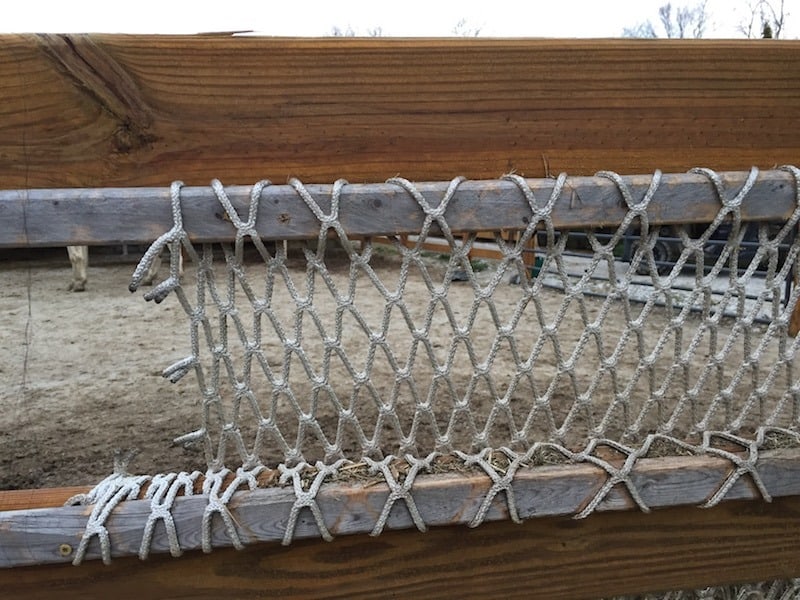 Normally the horses don’t waste a lot of hay when eating, unless it’s hay they don’t like. When these pictures were taken we had a less desirable batch of hay we were feeding, and they let us know they weren’t fans by being particularly wasteful.

Since these pictures were taken we’ve untied the extra strings holding the sides of the net to the fence. We had a few incidents where horses got legs caught over them.

Also, instead of attaching the netting to the fence boards as shown in the middle picture and in the linked article, we now have a simpler, more efficient method as shown in the first and last pictures: we slide a 1″ x 2″ piece of wood through the top and bottom edges of the net and screw each board into the back side of the fence board. This makes it far easier to remove the net and wastes less of the netting.

I was asked by someone to make a pros and cons list so here’s what I’ve come up with.

*Keeps the hay up off the ground, which is great if you deal with mud or sand.
*Makes the same amount of hay last a great deal longer because the size of the holes in the net requires the horse to take lots of small bites, significantly slowing down their eating. Because of this, it saves you money on hay and you have happier horses because their tummies aren’t empty for as long between feedings.
*Much less hay gets wasted.
*Easy to stuff hay into nets! If you attach them to your outer fences, you don’t have to open and close gates to bring hay in and out.

Cons:
*If you tend to have mud, the areas in front of the nets will slowly build up with mud, hay, urine, manure, etc. You either have to keep it raked out frequently or have a bobcat or backhoe scoop the buildup away every 6 months to a year depending on your conditions. Another option is to move them to a new spot periodically to keep the area from getting too bad.
*For us the nets have lasted about 3 years before they start wearing down and developing holes in the areas where the horses eat from the most. They likely wear down this quickly for us due to freezing and thawing conditions each winter which makes the nets more brittle. We generally take some twine and patch these holes as they develop, until there are too many, then we buy more netting and make a new net. Even though you have to spend more money every 3 years on new nets, we’ve found that the amount of money it saves us on hay and ease of feeding makes it worth the price.

One net should work for 2-4 horses depending on the width of the net and how well your horses get along.

In summary, we love most everything about using these nets. You can make them to meet your specific needs and adjust throughout the years as needed. Can’t imagine what life on the ranch would be like without them now!